As the kings of Israel and Judah become more dull of hearing, God raises up the office of prophet.

Jesus fulfills the predicted role of the “prophet like unto Moses”. The Son of God is the Deliverer of His people, accomplishing the Greater Exodus from bondage to sin and death at the Cross (Luke 9:31). In some aspects, John the Baptist fulfills the Elijah role in the New Testament (Matthew 11:13-14), but Jesus is the Greater Elijah.

Jesus is God’s full and final Word. He is the full vindication of the truth. The spirit of prophecy bears witness to Him (Revelation 19:10). He is prophetic authority personified. He is “The Word of God”.

There had been prophets before Elijah, but Elijah elevates the office of the prophet to supreme importance in the national life of Israel. From this point onward in the history of God’s people, until the coming of the Messiah, the prophet would be superior to the king.  The hearts of the kings that desired reform would have their work directed by the prophets through whom the will of God would be made known.

At a time when the nation had fallen into the deception of believing that “Baal is God” (1 Kings 16:31), God raises up a man to be His authoritative statement: ELIJAH- “Eli Jah!”- (literally “The Lord is God (Yahweh).”  This is the theme of Elijah’s ministry.

The nation had been led to believe that Baal was in charge of fertility and the rainfall in particular. Elijah would show that “the Lord is God.” He is God over all creation, including the rainfall.

So Elijah declared to Ahab that there would be no dew or rain “except by my word.”  Elijah was subject to the authority of the Word of God.  As we compare Jesus’ teaching in which he says, “the sky was shut up for three years and six months” (Luke 4:25) with the record in I Kings 18, it appears that there had already been six months of famine before Elijah gave this word to the king. This should have prepared Ahab.

I Kings 18:1 1 Now it happened after many days that the word of the LORD came to Elijah in the third year, saying, “Go, show yourself to Ahab, and I will send rain on the face of the earth.”

The Lord is God of the rainfall and storms. He is the God of heaven and earth. He never complains about the weather. He is in control. Baal is not. Elijah is fearless as he challenges the prophets of Baal to a contest on Mount Carmel. He meets Ahab’s chief steward, Obadiah (a God-fearer who had secretly hid 100 prophets in two caves), and demanded that Obadiah announce to Ahab that “Elijah is here!” (lit. ‘The Lord is God’ is here!)

Obadiah fears that he will lose his life if he announces this. However, Elijah’s confidence in God’s plan is persuasive. He says, “As the Lord God of hosts lives, before whom I stand, I will surely show myself to him today.” (When you are conscious of your standing before the Lord, you will not fear standing before men.)

Obadiah delivers the message “Elijah is here” to Ahab, who then comes to meet Elijah. When Ahab sees Elijah, he refers to the prophet as ‘the troubler of Israel.’  The word of the Lord not only comforts the afflicted but afflicts the comfortable! Elijah is not afraid to confront Ahab with his history of forsaking the commandments and leading Israel into Baal worship.

Elijah challenges the people of Israel and 850 false prophets (450 prophets of Baal and 400 prophets of the female fertility goddess, Asherah).  First, he comes close to all the people and declares:

“How long will you hesitate between two opinions? If the LORD is God, follow Him; but if Baal, follow him.” But the people did not answer him a word (1 Kings 18:21).

The test on Mt. Carmel is one in which Elijah gives the false prophets of Baal every opportunity to vindicate themselves. He assured them he was up to no tricks. The prophets of Baal often manipulated the crowd with false spectacle, arranging fires in tunnels beneath the altars to ‘wow the crowd.’ Elijah was going to prove the supremacy of the one True God to the demons they worshiped. They could choose the bull that Elijah would put on his altar as well as the one on their own and call upon the name of their god to their heart’s content. Elijah simply declares, “I will call upon the name of the LORD, and the God who answers by fire, He is God.”

The prophets of Baal could put no fire to the sacrifice. Elijah challenges their god to answer by fire.  Despite their calling on the name of Baal from morning to noon, pleading their sincerity with self-mutilation, there was no answer.

Then Elijah called people near. In their presence, he rebuilt the altar of the LORD with twelve stones representing the 12 tribes of Israel.  Then he made a trench around the altar and poured four jars of water on the burnt offering and on the wood. He did this three times.

Elijah was a man of public and private prayer. He had no special powers. His secret was that he knew that “the Lord is God” and he called upon him earnestly in prayer.

James 5:17 (NASB) 17 Elijah was a man with a nature like ours, and he prayed earnestly that it would not rain, and it did not rain on the earth for three years and six months.

His famous prayer was composed of only 62 words, yet it is one of the most effective prayers in the Old Testament. 1 Kings 18:36-37 (NASB) “O LORD, the God of Abraham, Isaac and Israel, today let it be known that You are God in Israel and that I am Your servant and I have done all these things at Your word. 37 “Answer me, O LORD, answer me, that this people may know that You, O LORD, are God, and that You have turned their heart back again.”

The Lord answers the prayer dramatically as the fire falls to consume the offering, even though it had been drenched with water.

Notice the response of the people. They start shouting Elijah’s name: “Eli, Jah, Eli, Jah, The Lord, He is God; the LORD, He is God.”

Elijah then seizes the 450 false prophets and takes them down to the brook Kishon, and slaughters them there.

Elijah, who prayed against all odds for rain, sends his servant to follow up to see if a storm is developing over the Mediterranean. This is a picture of EXPECTANT PRAYER.  On the seventh time, his servant sees what appears to be only a small cloud in the sky, like a man’s hand rising in the sea. Elijah speaks boldly, “Go up, say to Ahab, “Prepare your chariot and go down, lest the rain stop you.”

45 In a little while the sky grew black with clouds and wind, and there was a heavy shower. And Ahab rode and went to Jezreel. 46 Then the hand of the LORD was on Elijah, and he girded up his loins and outran Ahab to Jezreel. (1 Kings 18:45-46)

Do you trust the Holy Spirit for divine appointments and enablement to preach the gospel? Do you trust Him to prepare hearers?

Peter’s testimony and the reality of the conversion of the Gentiles silenced the naysayers!

Peter’s summary puts all the glory where it belongs, not on his evangelistic work but the work of the Holy Spirit. He gives glory to God:

Acts 11:18 18 When they heard this, they quieted down and glorified God, saying, “Well then, God has granted to the Gentiles also the repentance that leads to life.”

The gospel crosses the man-made barriers and the middle wall of partition that formerly divided Jews from the Gentiles (non-Jews). The men from Cyprus and Cyrene are motivated by the Holy Spirit to preach the gospel to the Greeks.

Are there particular people that the Lord is putting in your pathway or putting on your heart and directing you to share the gospel with?  We are here to be Christ’s ambassadors. Let’s be sure to ask Him for our assignments!

Barnabas continues to live up to his name, “son of encouragement.”  He personally visits the Gentile converts at Antioch.

Acts 11:23-24 23 Then when he arrived and witnessed the grace of God, he rejoiced and began to encourage them all with resolute heart to remain true to the Lord; 24 for he was a good man, and full of the Holy Spirit and of faith. And considerable numbers were brought to the Lord.

At Antioch, for the first time, disciples of the Risen Christ are called “Christians.”

The selfless concern of the new church at Antioch for the body of Christ at large, and the Jerusalem church, in particular, is evident as they are moved to give a gift to aid those afflicted by famine.

TODAY’S READING FROM THE BOOK OF PSALMS- PSALM 135

Praise the Lord for His grace. In Christ, you are chosen and grafted into His treasured possession.

A clear reference to God’s supremacy and sovereignty over all things is found in verse 6:

Psalm 135:6 6 Whatever the LORD pleases, He does, In heaven and in earth, in the seas and in all deeps.

As Elijah demonstrated, the Lord is God and rules over the weather!

Psalm 135:7 7 He causes the vapors to ascend from the ends of the earth; Who makes lightnings for the rain, Who brings forth the wind from His treasuries.

The Psalmist also reminds us that the Lord is a God to be reckoned with, not like the useless idols of the nations.

TODAY’S READING FROM THE BOOK OF PROVERBS- PROVERBS 17:12-13

Proverbs 17:12-13 12 Let a man meet a bear robbed of her cubs, rather than a fool in his folly. 13 He who returns evil for good, evil will not depart from his house.

This is another proverb exhorting us to be wise in choosing who we connect with and how we treat people.

PRAY FOR THE NATIONS 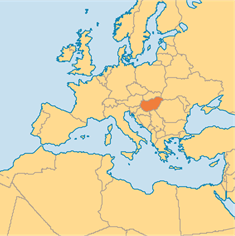 A landlocked, central European state on the River Danube.

The small but historically rich evangelical movement is growing in size, maturity, diversity, and confidence. Many types of ministries are springing up around the nation, and the vision exists to see an evangelical church planted in every city, town and village in Hungary.

Disillusion, dissatisfaction, and upheaval against the government and economy in particular often characterize life in Hungary. The 1956 uprising and widespread demonstrations in 2006 and following demonstrate the desire for a better state of affairs. Political scandal has brought much disappointment and skepticism. Pray for elected officials that they would look past political point-scoring, root out the widespread corruption and labor toward improving life for the whole nation.

PRAYER: These readings, dear heavenly Father, remind us that You alone are God. We are encouraged by Elijah, a man who is like us in so many ways yet who trusted that You would vindicate Your Name. As the Psalmist said, You will vindicate Your people and have compassion on Your servants. Our prayer is that today You will let it be known that You are God in our part of the world where people are held captive in darkness and serving their idols. Answer us by opening the hearts of the Corneliuses and by sending us to be Peters and Barnabases.  May the gospel call people out of bondage to the god of this age into the glorious liberty of Your kingdom! In Jesus’ Name, we ask it!

So, naturally, we proclaim Christ! We warn everyone we meet, and we teach everyone we can, all that we know about him, so that, if possible, we may bring every man up to his full maturity in Christ. (Colossians 1:28, J.B. Phillips paraphrase)

Donations applied to our general fund.