Babylon’s destruction is prophesied in Jeremiah 51. Many of these images are picked up by the Apostle John as he describes the destruction of a revived Babylon in the Book of Revelation (Rev 17-18).

One image that is used to describe God’s judgment is that of a harvest. During harvest time, it is necessary to separate the grain of wheat from the chaff. The stalks of grain must be rendered a treatment that separates the good grain from the rest. The grain must be trampled or beaten to break free the kernels.  Winnowers would thresh the wheat, throwing the mixture of grain and chaff in the air. The wind would blow away the chaff while the grains of wheat fell to the threshing floor. Jeremiah predicts that Babylon will be blown away by foreign invaders like chaff is blown away by the wind. It will be trampled on, like grain on the threshing floor (Jeremiah 51:2, 33).

John the Baptist used this imagery when speaking of the Messiah whom we will all meet one day as either Savior or Judge.  The wheat will be freed in the Spirit, and the chaff will be judged in the fire.

Matthew 3:11-12 11  “As for me, I baptize you with water for repentance, but He who is coming after me is mightier than I, and I am not fit to remove His sandals; He will baptize you with the Holy Spirit and fire. 12 “His winnowing fork is in His hand, and He will thoroughly clear His threshing floor; and He will gather His wheat into the barn, but He will burn up the chaff with unquenchable fire.”

There is pity in these proclamations. (Jer 51:8)

Jeremiah 51:8 8 Suddenly Babylon has fallen and been broken; Wail over her! Bring balm for her pain; Perhaps she may be healed.

Ezekiel 18:32 32 “For I have no pleasure in the death of anyone who dies,” declares the Lord GOD. “Therefore, repent and live.”

Ezekiel 33:11 11 “Say to them, ‘As I live!’ declares the Lord GOD, ‘I take no pleasure in the death of the wicked, but rather that the wicked turn from his way and live. Turn back, turn back from your evil ways! Why then will you die, O house of Israel?’

Yet, there is a time limit on God’s forbearance. The Lord must take vengeance and will vindicate His holy justice. “Babylon cannot be healed.” (Jeremiah 51:9)

“We would have healed Babylon” is an expressed will of desire. Judgment (Babylon cannot be healed) is the decree.

Jeremiah 51:9 9 We would have healed Babylon, but she was not healed. Forsake her, and let us go each to his own country, for her judgment has reached up to heaven and has been lifted up even to the skies. 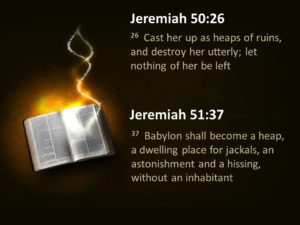 Jeremiah 51:12b For the LORD has both purposed and performed (decreed-NIV) what He spoke concerning the inhabitants of Babylon.

Jeremiah 51:29 29 The land trembles and writhes in pain, for the LORD’s purposes against Babylon stand, to make the land of Babylon a desolation, without inhabitant.

These prophecies are partially fulfilled by the invasion of the Medes and Persians, yet, as far as we know, Babylon continued to be inhabited, and attempts to rebuild ancient Babylon have taken place in recent years. The Book of Revelation tells us that there is a further judgment in the future. Whereas Babylon is symbolic of the world system under the dominion of sin, the accurate fulfillment of the Old Testament prophecies in the past would indicate that we can expect an accurate literal fulfillment of the remaining prophecies in the future.

The Zoroastrian Emperor Cyrus of Persia is an instrument in Yahweh’s hands (Jer. 51:20) as he conquers Babylon, but he did not leave it desolate forever, as we have already noted. A future destruction of Babylon with all her idols is anticipated.

Jeremiah 51:26 26 “They will not take from you even a stone for a corner nor a stone for foundations, but you will be desolate forever,” declares the LORD.

Jeremiah 51:53 53 “Though Babylon should ascend to the heavens, and though she should fortify her lofty stronghold, From Me destroyers will come to her,” declares the LORD.

Titus 2:1 1 But as for you, speak the things which are fitting for sound doctrine.

Titus 2:15 15 These things speak and exhort and reprove with all authority. Let no one disregard you.

He is to teach older men (2:2) and older women (2:3); young men (2:6-8) and give teaching for the workplace (2:9-10). He sets good patterns for discipleship in the local church, with the younger men and women learning from the older ones.

God’s grace is widely misunderstood in the church today. Many see that the Christian should focus on God’s love and grace alone, ignoring His commands, warnings, and His call for ongoing obedience. Jesus said that if you love me, you will keep my commands (John 14:15; 15:14).

Titus explains how grace not only secures our justification but calls us and equips us for sanctification.

Titus 2:11-14 11  For the grace of God has appeared, bringing salvation to all men, 12  instructing us to deny ungodliness and worldly desires and to live sensibly, righteously and godly in the present age, 13  looking for the blessed hope and the appearing of the glory of our great God and Savior, Christ Jesus, 14  who gave Himself for us to redeem us from every lawless deed, and to purify for Himself a people for His own possession, zealous for good deeds.

The most dangerous kind of gospel preaching today is the preaching that distorts the effects of God’s grace. God’s grace calls us to a life of holiness. Jesus died for us, rose again to live in us, and instructed us to ‘deny ungodliness and worldly desires’. This is counter-cultural, but it is the true Christian life. A life that excuses sin and takes no heed of Christ’s commands is counterfeit.

Psalm 99 is a celebration of our God as King. Let the people tremble, and the earth shake. His supremacy and His mighty powers are praised in verses 1-3. His holiness and justice are praised, as well as His ways with His people (v. 4-5).

His faithfulness to believer-priests is extolled in verses 6-9 and the merciful provision that when we call upon the Lord, He hears and answers. He is both merciful and forgiving, and as a loving Father, He disciplines His children.

God spoke to His servants, Moses, Aaron, and Samuel, whose lives were set in the direction of obedience. He was merciful and forgiving to them. Yet He chastened them for their evil deeds.

Hebrews 12:7 7 It is for discipline that you endure; God deals with you as with sons; for what son is there whom his father does not discipline?

TODAY’S READING FROM THE BOOK OF PROVERBS – PROVERBS 26:17

Proverbs 26:17 17 Like one who takes a dog by the ears Is he who passes by and meddles with strife not belonging to him.

Here is a clear warning not to borrow someone’s offense or become a third party in a conflict that does not belong to you. It is about as profitable as taking a dog by the ears. You are hurting, not helping, the situation. Direct them to the Scriptural principles of conflict resolution (Matthew 18:15; 5:23-24; Galatians 6:1)

PRAY FOR THE NATIONS –

A long history of Catholic tradition is under threat. The three main Christian groups (Catholic, Orthodox, Lutheran) are lacking in spiritual vitality. They are rapidly declining into irrelevance while agnosticism, New Age, and different forms of Eastern religious beliefs are increasing, as is general spiritual apathy, even among those who notionally believe in God. Pray for an awakening in the mainline churches that draws the many nominal Christians into personal faith in Christ.

Evangelicals are few, underfunded, and divided. There is an evangelical presence in only 28 out of 210 municipalities, so church planting teams are clearly needed. The tiny evangelical population often reflects the divisive culture of the South Slavs – pray for unity and the formation of an Evangelical Alliance. Of the few dozen fellowships, almost none are self-funding; most pastors rely on secular employment or external financial support, and there is little teaching in churches on stewardship and giving. Pray for Slovene believers to rise to the challenge of personal evangelism, to support their own pastors and even to send missionaries.

PRAYER: Lord, You are a gracious Father. You are altogether good and true. Thank You for Your mercy and tender care. You have given us Your Son and sealed us with Your Holy Spirit. We are reconciled through Christ’s shed blood and made alive to You by Your Spirit. Your grace is at work in our lives and teaches us to deny ungodliness and worldly desires. You have set our lives in the direction of obedience and spurred us on to pursue holiness. You love us enough to discipline us when we go astray. In Your faithfulness, you afflict us. You restore us and strengthen us. We pray that all the people of the earth would reverence Your Name. May we be working together with You today as You build Your church. May we live sensible, righteous, and godly lives to the praise of Your glory. In Jesus’ Name. Amen.

Donations applied to our general fund.